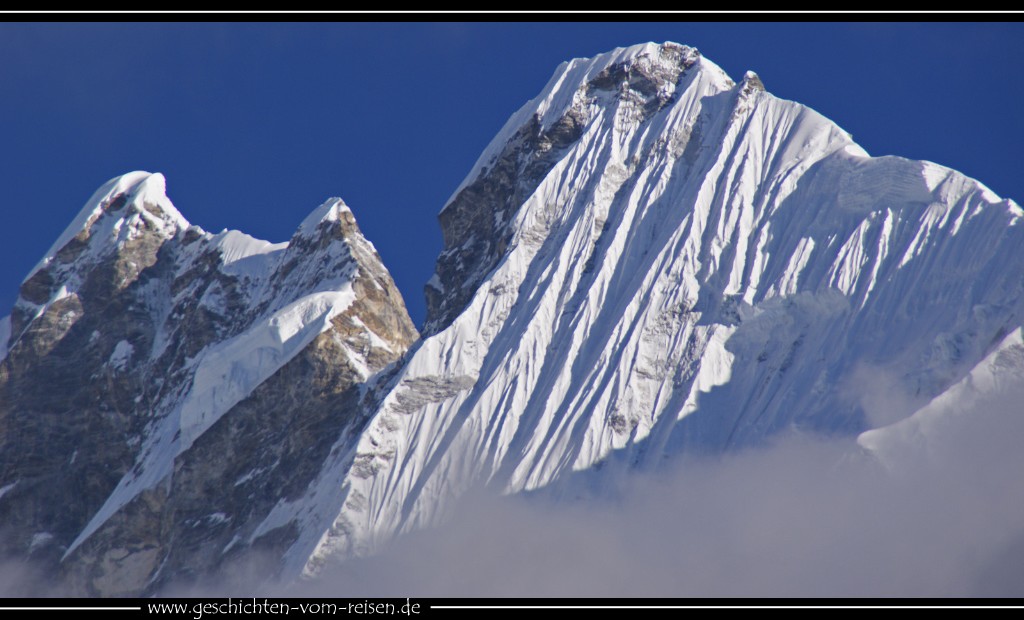 A stove is radiating warmth in a freezing night
The grandmas smile carries away the childs fear
A blond haired tourist is operating her ipad
the grandpa next to her is astonished, not being able to read though
two worlds are meeting, having not much in common besides
being in the same room for some hours tonight

There were two options for this morning: An early start at four a clock in order to hike up on a hill for some good views on Langtang Lirung or a normal start of the day at 6:30. The weather did no look very promising, neither in the evening nor when I stood up in the night. So I went to bed again. Now it is seven a clock, porridge, a fried egg and some ginger lemon tea give me a solid start into the day.

Still it is cloudy, however windows of blues skies fight their way through. Again we change the plan, originally we wanted to start hiking back after breakfast, now we give it a try to catch some views on the surrounding mountains. The hotel takes care of our luggage while we stroll up a hill. We are lucky with our decision, the weather allows now to catch some views on the majestic peaks of the mountain ranges north and south of us.

So it finally is a while later as we now start our way back out of the valley. It is the same way in reverse direction, basically known, however, the perspective is different. It are the same locations we come across, in opposite direction though. Our way starts with open farm land, then changes to a pleasant forest, then again to a deeply cut, narrow rainforest valley.

We pass bye again the two military control posts, showing our papers again, it is noted that we left the region. The langtang national park is one of the more dangerous regions in Nepal, frequently incidents happen here. My local guide will later also tell me a short story on the Tims registration principle. Basically every trekker need this registration. However there is a main difference between going for yourself or being with a guide of an official tour operator. The registration in the second case includes the recording of the trekkers name and the companys. Whenever there is an incident with a trekker the tour operating company will immediately have big problems. Also the guide is threatened to loose his license, to loose the basis for his life. So being with an officially licensed guide is a good life insurance.

Well, this is the positive side of being with a guide. On the other hand, while being with a guide, you will have to bear a person that is foreign to you all time, not only foreign on the personal level, also in the meaning of being of different culture and having different habits. Basically I feel being in a perfect trekker flow today, being in some trance state, walking, watching – watching the inner and the outer world. However I feel disturbed by the Aura of my guide. Hectically we walks around me, keeping not much distance. The difference in the reasons for us both being here may explain the unequal attitudes. I came here self chosen for getting away from traffic and hectic back home. He however is here to earn some money and he has to do this by walking. To him walking must be a waste of time, wherever you want to get to in this country, it will take ages, and you are likely to have to walk for long.

Nature set up a fairy tale scenery today, changing from clear weather in the open plains to surrounding mist in the forests that hundreds of years old. Moments like this allow for reflections, allow to see clear and to make decisions. So do I. I have the firm opinion to stop eating meat on weekdays, to stop drinking alcohol on weekdays, to reduce my weight, to do regular meditations, to play more guitar, to do less things, to focus more on the few things left and to work harder on my goals. Nearly one year later I will try to type down story of this trek – I will be astonished how such clearly felt decisions will be forgotten in such short time.

Lama Hotel as well as the neighboring guest houses are booked out and we are sent away. Just below we find a place for the night. But also here rooms are short, I will have to share the my place with my guide. Obviously he feels discomforted, but I earn respect from him as I say that this is not a problem.

The main building of our guest house consists of two rooms, the eating hall for the guests and the kitchen. The trekkers accumulate around the stove, gathering some warmth. Unquestioned the seats are shared with the host family and the guides. Grandma takes care of the infant while the mother cooks our food. The picture is strange: A single room is filled with traditionally clothed locals of distinct appearance and western trekkers, wearing high tech briefable membrane clothing and hacking into their iPads. Two worlds meet for few hours, a coincidence for a night. Sometimes I try to change rolls in my mind. How would it be if people would come bye my place, having equipment and clothing that I would have to work all my life for, knowing on the other hand I never will be able to buy myself?

These are moments when I feel guilt. But then I look in the faces of the people here. They are so friendly, such polite hosts. The warmth in their smiles seems to be born in an endless warmth of big hearts. There is no sign of regret or celiouscy in their appearance. In return I recognize that we should be the once that should be cellious, we have everything but this is not preventing us from being unhappy.